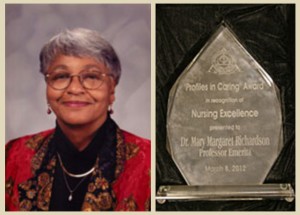 Mary Margaret Richardson prefers to be called Dr. MMR, an acronym those who know her best find especially fitting, grew up in her hometown of Hopkinsville, KY. Her decision to become a nurse did not arrive until her third year at a teachers college in Missouri. She graduated with an associate’s degree from the University of Kentucky Community College in 1970. From there pursued a bachelor’s degree in nursing which she attained in 1973 from Valdosta State College at that time, and finally earned a Master of Science in Nursing from the Medical College of Georgia one year later. She worked most of her career at Valdosta State until finally retiring in 2002. Though that was not the end of the line of her Nursing career. Through the summer of 2005, she remained as the interim dean for until her successor assumed her full position and now retains the status of professor emerita at VSU.

She was nominated from the CONHS for the 2015 Distinguished Alumnus award and this award will be presented during homecoming 2015.