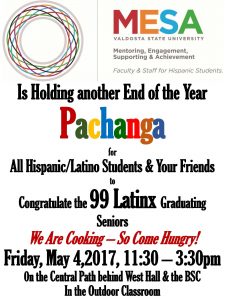 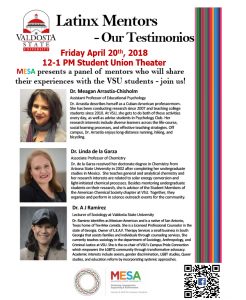 Please join us on April 20th for a panel of VSU faculty that will discuss their experiences of being LatinX. 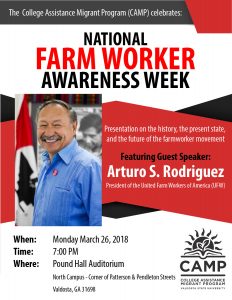 Please disseminate to your respective departments and classrooms to encourage participation and attendance.

The Process of Becoming: Labels and Identity Politics in the Hispanic/Latino Community by Samira Y. Garcia, Ph.D.

The Process of Becoming: Labels and Identity Politics in the Hispanic/Latino Community

Every once in a while, I strike up a conversation with a stranger. This may happen in a social setting, in a professional setting, and/or even in completely spontaneous and unexpected places (like when I am paying for my groceries). Regardless of the context, these conversations seem to unfold in a particular pattern. We exchange names and then maybe engage in some friendly small-talk about the weather or some other current circumstance. I begin to wonder about this person and form my first impression of him or her. Then, the question comes up, “So, what are you?” I immediately fight back temptation to answer, “a me,” while fully knowing the meaning of the question. This person is curious about my ethnic identity.

In 1973 the term Hispanic made its U.S. Census debut as an ethnic classifier (U.S. Census Bureau). With it came an onslaught of controversy in regards to who the term actually defines and its implications for ethnic identity. Nearly four decades later, a 2012 report published by the Pew Hispanic Center in Washington, D.C. stated that more than half of those hailing from Central America, South America, and other Spanish-speaking countries (who would fall under the ‘Hispanic’ classifier) defer back to nationality and family’s country-of-origin when asked how they identify themselves (Pew Research Center, 2012). This trend of rejecting the census classifier is no surprise since the U.S. Census Bureau has a long history of blurring the lines between what we recognize as race, ethnicity, and nationality. It also has great influence on the nation’s socio-political climate by infusing its classifying terms into the everyday U.S. vernacular. At best this creates confusion, at worst, ample opportunities for offense and oppression.

In order to contextualize this conversation, I feel that I must let you know a little bit about myself. I was born in the U.S., a daughter of legal residents hailing from the Dominican Republic. My parents believed in the American dream and the benefits of holding U.S. Citizenship. They have now become naturalized American Citizens. When my mother found out she was expecting my older sister, they uprooted from San Cristobal, Dominican Republic to Fort Lauderdale, Florida. Two and a half years later, I was born, and two months after that we headed back to the Caribbean as a family of four. I spent my childhood in the Dominican Republic, my first language is Spanish, but politically and socially I was a foreigner. To my friends, neighbors, teachers, and extended family members I was an America. Fast forward 8 years, with my mother expecting once again, we headed back to Florida. The place where I was born but I knew little about, where I didn’t speak the language. I was enrolled in school and my paperwork said I was Hispanic, but I really was just confused. A las, like many in my position I assimilated and adapted. However, with the changes in how I viewed myself so came changes in the way I labeled myself.

The Hispanic/Latino community is expected to be the largest minority group in the U. S. by 2050 (U.S. Census Bureau). The scope and reach of our population is itself greatly diverse. While the term Hispanic captures those with Spanish ancestry and from Spanish-speaking countries, it is insufficient to represent a great deal of those who make up our community. Latino/a offers a wider reach as it includes peoples from Latin American countries such as Brazil and Guyana, as well as those from the Iberian Peninsula that may not be Spanish-speakers. However, these labels are often assigned, leaving little room for self-identity and ownership. During these last four decades since the introduction of the Hispanic classifier, many have devised new terminology that reflects an intentional representation of self and counter the labels assigned by other. Some examples are:

Chicano- which denotes Mexican ancestry and ethnic identity. This terms is sometimes used interchangeably with the term Mexican-American.

Latin@- which recognizes Latin heritage in a gender neutral way.

LatinX- which denotes Latin heritage for those who identify as non-binary and/or gender fluid.

Afro-Latino/a- which honors the African heritage and ancestry left by the slave trade while actively challenging the colonizing traditions of some of our cultural narratives.

This list is in no way exhaustive, and I believe will continue to be augmented in years to come. This is precisely the essence of identity politics. We understand ourselves as we view and label ourselves. We present and re-present ourselves with such labels. When labels, classifiers, and identifiers are assigned by forces outside of us, we tend to feel misunderstood and oppressed. We responded by developing new languages that more accurately reflect how we view ourselves, language of which we can take ownership. My own trajectory has led me to identify as Hispanic, Hispanic/Latina, and currently as Hispanic/Afro-Latina, as I aim to honor my multiple cultural heritages and ancestral history. This process of flux, in which I change, collect, adopt and challenge the labels assigned to me is a process of becoming. Becoming what I understand myself to be. I believe that as I continue to learn about myself and my heritage, and as the social climate continues to bring narratives of privilege and oppression to light, the way I view myself may change. With it, the labels I own may also change. I also suspected that there are many out there with similar, more interesting stories than my own.  Like me, I believe they feel most respected when they can take ownership of their label and self-representation.

Good morning! I want to thank Dr. Kelley for her help in obtaining access to this website. Thank you!

Hola! Welcome to MESA! The purpose of this organization is to provide support and a sense of community for Hispanic/Latino/Latina students at Valdosta State University. Please read more about our purpose here: About MESA. Students, faculty, staff, and friends of the community are all welcome to use this page to share information, post about local events, and simply keep us connected!