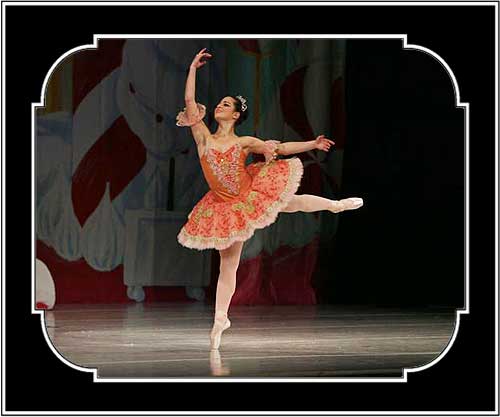 VALDOSTA — When Linda C. Chase’s Dance Arts Inc. dancers take the stage for their 42nd annual production of “The Nutcracker,” they will once again spin and glide and leap and prance to a special arrangement of Pyotr Ilyich Tchaikovsky’s mesmerizing and magical score, played by the Valdosta Symphony Orchestra (VSO).

“My special arrangement of ‘The Nutcracker’ is actually a reduced orchestration of all the music for the ballet,” explained David Springfield, director of the Jazz Studies Program at Valdosta State University.

“The original music by Tchaikovsky was written for a large, full symphony orchestra of between 70 and 100 musicians. My reduced arrangement will be performed by 27 musicians of the Valdosta Symphony Orchestra.”

Springfield began working on the arrangement in May of 2013. He finished it nearly five months later, at the end of October. It premiered during the 2013 performance of “The Nutcracker” and will be played by the VSO again this year.

This is the fifth year the Valdosta Symphony Orchestra has partnered with Chase and her Dance Arts students. Dr. Howard Hsu, conductor and VSO music director, said that it was Dr. Doug Farwell, VSO principal trombonist and executive director and head of the VSU Department of Music, who facilitated the partnership.

Springfield said that it was Hsu and Farwell who asked him in 2013 to create a new version of “The Nutcracker” score specifically for the Valdosta Symphony Orchestra, one that would hopefully be more musically satisfying for the musicians, dancers, and the audience alike. In years past, the symphony orchestra played a pre-existing reduced arrangement of the music.

“Because the ballet contains nearly two hours of music, it was quite a large project,” he shared a few days before the 2013 premiere. “It involved not only making all the musical decisions but also inputting the music into a computer program and then printing and copying the conductor’s score and parts for all the instruments.”

“Since Tchaikovsky’s music is so well-known and iconic,” he continued, “this is not a radical re-arrangement of the piece. It was actually like a puzzle where I had to take this wonderful music and make it work for the smaller instrumental forces of the Valdosta Symphony Orchestra.”

With “The Nutcracker” being so popular and performed so frequently all over the world, Springfield noted that special or reduced arrangements of the music are quite common due to the size of the performing ensemble, size of the venue, and available budget for the performances. He said that all of these factors apply to the upcoming Dance Arts performances, particularly the limited capacity of the orchestra pit at the performance site, Mathis City Auditorium, which will accommodate no more than 27 VSO musicians and their instruments.

“The VSO looks forward to working with Dance Arts for ‘The Nutcracker,’ especially since it gets everyone in the mood for the holiday season,” Hsu said.

“The excellent arrangement that David Springfield wrote for us captures the magic of Tchaikovsky’s score and allows the VSO to sound its best.”

Performances of “The Nutcracker” will be held at 7:30 p.m. on Friday, Dec. 5, 1 p.m. and 7:30 p.m. on Saturday, Dec. 6, and 2:30 p.m. on Sunday, Dec. 7, at Mathis City Auditorium, 2300 N. Ashley St. Tickets are $12 for the two evening and the Sunday performances and $10 for the special narrated Saturday matinee. Reservations are required. Visit NutcrackerValdosta.com for more information.

Springfield has played the piano for more than 30 years. In addition to his position as director of VSU’s Jazz Studies Program, he directs the VSU Jazz Ensemble and teaches jazz piano and courses in improvisation, jazz arranging, and jazz history. A member of the Department of Music faculty for 12 years, he enjoys helping his students become better musicians by sharing his knowledge and experience with them. He also plays trombone.