A seven – minute film about a depressed young woman, who is cured by her therapy group, was the highlight of this Fall’s Film & Video Society’s 48 Hour Film Festival, held on Nov. 4-6 in the Mass Media Building.   Five groups competed in the contest, and three won cash prizes and Certificates of Honor.

“Masked,” the First Place winner, was written, directed, performed, and edited by the group captained by Nathan Ragland, which featured Andrew Irvin, Freling Scarborough, Tyra Mills, Sadiyah Charlton, Kate Green, Alex Foster and Ronald Scott in various production and acting roles.   The main character hides her anxiety behind a smiley-face mask, but grows stronger due to the support of other students. “Moments Before the End,” a piece about a mysterious package, won Second Place, from the team captained by Levi Johnson, which featured Evan Creamer and Jonathan Bice. “Not All Friends Talk,” a video from Antonio Scantlebury, about a man who speaks to a mysterious idol, won Third Place.

As per contest rules, the production groups had 48 hours (from 6:30 p.m. Friday to 6:30 p.m. Sunday) in which to write, cast, perform, and edit a narrative video story, which must include three elements chosen from random on Friday night: a character, a prop, and a line of dialogue.   This Fall’s elements included a character who tells the worst jokes, a mask, and the line, “I can think of a million ways; don’t try me.”    Mass Media Professors Gregory Brown, Andrew Black, and Dennis Conway judged the contest.  Conway also serves as the Film and Video Society’s Faculty Advisor.

Nathan Ragland, who also serves as the Film & Video Society’s president, said that the 48 Hour Festival “challenges students who enjoy video production to create and improvise under strict deadlines.” He said that the contest is “frantic but fun.”  Ragland also captained the group that won the last FVS 48 Hour Festival, in the Spring of 2016.

The Film and Video Society meets monthly, in the Mass Media Room 1001, on the first Wednesday of the month, at 7 p.m. The group’s purpose is to encourage students with an interest in production, to watch and learn from films, and to assist each other with their own productions.  Upcoming sponsored events include the Mass Media End of the Semester Showcase, to be held on Dec. 4 in the Student Union Theatre, which will feature the Mass Media program students’ best work. Another 48 Hour Film Festival, to be held in Spring, will invite Georgia high school and college students to compete.  For more information about the FVS, email Nathan Ragland at ndragland@valdosta.edu. 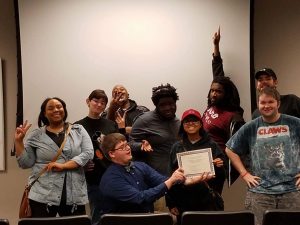 A Winners’ Celebration (Left to Right):