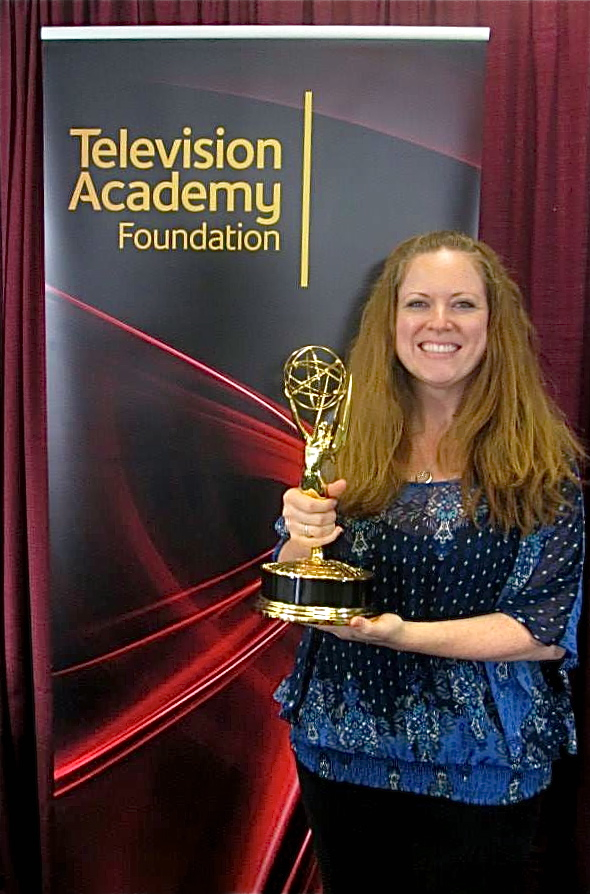 Valdosta State University’s Marie M. Elliott was among 20 educators from colleges and universities across the United States selected by the Television Academy Foundation to attend its 27th annual Faculty Seminar Fellowship Nov. 10-14 in Los Angeles, Calif. Getting to hold an Emmy was one of the many highlights of her week on the West Coast.

VALDOSTA — Valdosta State University’s Marie M. Elliott was among 20 educators from colleges and universities across the United States selected by the Television Academy Foundation to attend its 27th annual Faculty Seminar Fellowship Nov. 10-14 in Los Angeles, Calif. She spent the week immersed in the entertainment industry, learning the very latest about such topics as how producers and writers function, developing ideas and sources, the similarities and differences of directing different genres, program selection, digital entertainment, and more from the industry’s top professionals.

“This was probably one of the best things I’ve done for my professional development,” noted Elliott, an assistant professor of mass media in the Department of Communication Arts. She said that her week at the seminar “consisted of panels, hands-on demonstrations in renowned studios, evening mixers with entertainment professionals — and some famous stars like Geena Davis — and meetings with studio executives.”

Watching a live airing of Dancing With The Stars. Elliott said, “The movable sets, production techniques, and camera choreography is something I can’t wait to share with my classes. The equipment they ran and the sets they changed out were so simple and streamlined. It made watching the three-minute and 20-second commercial breaks so interesting, and I can’t wait to show my MDIA 2050: Introduction to Electronic Media Production classes diagrams and examples of how professional reality shows are staged today. It was probably one of the most valuable experiences I’ve had behind the scenes of a televised studio production.”

Attending a number of panels led by such industry experts as Jeff Melvoin, a producer and writer known for his work on such shows as Northern Exposure, Army Wives, and Alias; Gabrielle G. Stanton, a producer and writer known for her work on Grey’s Anatomy; Denny Dugally, a production designer known for his work on Brothers and Sisters; and Jeff Jur, a cinematographer known for his work on Dirty Dancing, My Big Fat Greek Wedding, and Joy Ride. Elliott said, “All the panels were exceptional, but I most enjoyed TV Business and the Development Process, Series Showrunners, Physical Production 101, Below the Line, Directing For Television Workshop, Securing Rights, Elements of Reality Television, and Programming the Network Channels. I got insight into how writing for television is done, what techniques directors use to work with actors, how reality shows are pitched and picked up, how internships and below-the-line jobs affect future career goals, how labor laws impact industry jobs, specific experiences from working on shows like Wipeout, Fear Factor, Orange is the New Black, Black-ish, The Real World, Big Brother, Northern Exposure, Grey’s Anatomy, Ugly Betty, Bones, Drop Dead Diva, Dawson’s Creek, The O.C., Sleepy Hollow, Dexter, The Mentalist, How To Get Away With Murder, Mad Men, and my personal favorite, Twin Peaks. Speaking to these cinematographers, editors, production designers, writers, showrunners, and lawyers gave me an opportunity to ask very direct questions that my students want to know about equipment and software, getting jobs, crew job duties, and freelancing. I have such a better understanding of areas I touch upon in all my classes like media law, media economics, ethics, and all the production aspects I cover.”

The Television Academy Foundation’s mission is to chronicle and celebrate the history of television and to inspire and educate the next generation of television leaders.