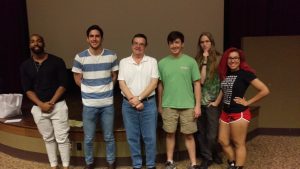 John Bickel, Scarlett Ashe, and Jeremy Johns won First Place for their nine-minute dramatic piece, “Passage.”  The plot featured a young man and woman stuck in a time loop, as they try to leave a passage in a building.  In the hallway, they encounter the woman’s boyfriend, who punches the man out, in a fit of jealousy, and when he wakes up, the story starts again, with variations.  The two people must remember and learn from their previous experiences, to finally escape the passage.   Second Place went to another drama, “Redo,” a five – minute piece by Jazmin Serrano – Arce, whose plot features another time loop story, this time featuring a young man in danger of being hit by a car.  He must alter his routine, to escape his fate.   Third Place went to “Missing Her,” a four  -minute Drama with Music, by Avery Stephen and Kaylon Baker, about a young man getting over an ex-girlfriend.

The FVS will hold its Fall 2017 End-of-the-Semester Showcase in November, as well as other events in the Fall. The group meets on the first and third Wednesdays of the month at 7 p.m. in the Mass Media Building, to encourage student video production, and discuss film industry issues.     It will also host the South Georgia Film Festival, to be held in Spring of 2018.